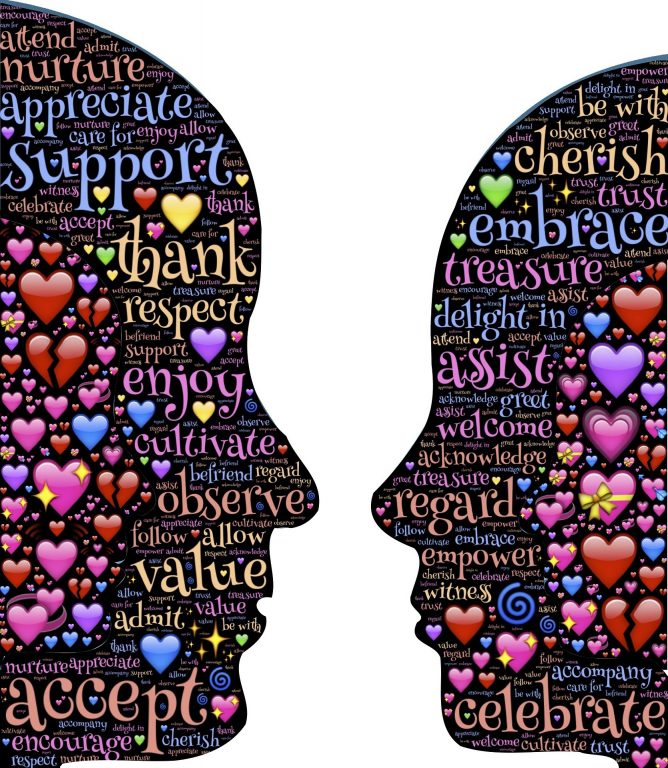 Most of my life consists of hearing people; hearing parents, hearing sister, hearing kids, hearing friends and past hearing significant others. They all know I’m hard of hearing and accommodate me as much as they can but I’m not their norm. It’s hard for them to make different habits just for me so they tend to forget what I need to hear.

For example, while in a vehicle they talk at the window instead of towards me. If I’m driving, it takes vast amounts of energy to hear the person in the passenger seat because that’s my bad ear and they know it but they keep talking. I used to like talking while driving too but now it wears me out since my hearing took a drop.

These days I need to face people more. I feel horrible for thinking this but sometimes I wish the person in the passenger seat would shut up for an hour on those long drives so I could relax. They keep talking even though I’m about to fall out of the drivers seat from leaning closer to them and watching the road with the corner of my eyes only. I remind them to face me but after a while, I wind up too tired to care and fallback on faking it. Especially at night.

Walking and talking go the same way. I try to stay on people’s right side so they are next to my left ear. Hearing people tend to forget and I end up doing a type of tango to put them on my better side. As traffic zips by, they continue talking. I hear, “She went back home to get-WHOOSH…WHOOSH and that’s how she found out.” Of course my reply is, “What?” It amazes me how hearing people can hear above traffic noise. I can’t.

Music is another thing that can be tough to agree on. I play music from the 70’s and 80’s that I remember or I listen to electronica. Why electronica? Because it has a good bass beat to follow and I can get a lot of it without lyrics. I’m 44 years old and don’t know too many other people my age who like electronica.

Last week, a hard of hearing friend passed through my end of the country. John is a bilateral cochlear implantee so he’s hard of hearing. I met him at the HLAA convention in Rhode Island last June. We connected thanks to my balloon hat and a mutual love of electronica music. While I get to spend some time around other hard of hearing people such as at the convention or for meetings, rarely to do I get spend days at a time with someone else with a hearing loss. It’s a unique experience and it tends to blow my mind. It’s so much easier! They live it so they know it.

We explored some of Northern Arizona together, and the south rim of the Grand Canyon.  We hiked the rim trail.  Most of the time, we walked side by side when we could.  I only had to move him to my left once and he remembered from then on to stay on that side for talking. When the shuttle buses went by, he automatically stopped talking and resumed only after they passed.

That afternoon was breezy and we all know how the wind sounds through hearing aids and cochlear implants, like fingernails on a chalkboard. With bad gusts, he would stop talking and wait until the worst was over to resume talking. And he taught me to cup behind my hearing aids to block the wind. We walked for about five hours and talking like this and I didn’t wear me out mentally (physically is another story). With hearing people I want to stop talking after two or three hours.

The drive home from the Grand Canyon was full on dark. He drove. Silence filled the space but it was a comfortable silence. I know how difficult it is for me to hear in a car with road noise let alone in a dark car. Blissfully I laid my head back to relax knowing he had to understand and of course he did. I even dozed off a little.

The next day we drove to Sedona. This time we hooked up my iPod loaded with electronica. A few times I turned it down to say something but mostly we just listened to music. I paused the music for directions. Finally! Someone I could be comfortable with in the car. Someone who didn’t feel the need to talk the whole time and could enjoy my kind of music. What a bonus!

In between driving we talked lots. Sign language and finger spelling filled gaps. There were repeats with no impatience and never did my head hurt from trying too hard to hear. Both of us were the upfront types about our hearing loss so other people we came into contact with, knew to accommodate us. If I didn’t say something first, he did. How nice to be on the same page with someone.

Later that night we wound up in Jerome, AZ and the whole town was gearing up a big weekend full of Halloween fun. The one bar in town had a live band playing so we went. To our ears, the band played well. He put his implants onto the music program so he couldn’t hear my talk well so we danced instead. The few times we did talk, he didn’t yell in my ear like most hearing people tend to do. He got close but kept us face to face so I could read his lips and vice versa. Mostly we kept dancing and we were the only two people dancing in the bar… two hard of hearing people having a good time even if it wasn’t electronica.

There is one other person I get to spend time with who also happens to have bilateral cochlear implants. With Susan, I find the same understanding and principles when I am with her also. The only difference is, I have a harder time hearing her because of my profound high frequency hearing loss but we do well in spite of it thanks all the above types of behavior. I wish I had a whole tribe, a village, of hard of hearing people to live with.