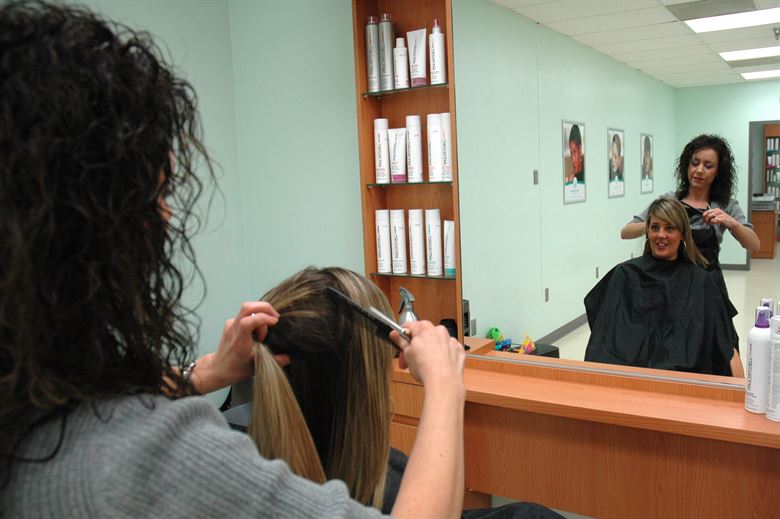 It’s hard to find a hairstylist that “gets” you.  I put off going to the hairstylist for this reason.  When I lived in Atlanta, I finally found a lady I just loved, through a coworker.  I was sad to move from the area, mostly because I had to leave Addy behind!!!  You might think I’m kidding.  I assure you the thing I miss most about living in Atlanta is my hair stylist.
I’ve had the “hairstylist horror stories from hell” (the old triple “H”) since living in Minnesota.  Though I don’t think that the horror relates to my hearing loss so much.  The first few people I had cut my hair (went back to coloring myself) were just so so.  They were nice enough, and understood I wasn’t going to hear them.  Then, they never spoke to me again the entire time they cut my hair.
Next came my brilliant idea of embracing my natural gray — I love the white Bride-of-Frankenstein striping of my gray, but don’t love the all over salt & pepper look.  I had highlights put in my hair when I had it colored.  So why not use my natural highlights and lowlight the rest?  Well, I’ve yet to find a stylist who says this is doable, but I have no clue why not?
Four stylists later and I’ve been shown the “why not?”.  Cruella De Vil looked matronly compared to the worst version of trying to get this look!!!  I finally gave up and had my son’s girlfriend set up an appointment with her mother who lives in the cities. I just had her give me all over color and highlights.  Not bad, but not what I wanted.
Here I am months and months later, and I have 4 inches of natural that flows into an ugly, faded, and washed out reddish brown.  It looks really ugly next to graying dark brown hair.  My hair has no reddish tones, and is very dark brown, almost black.  Getting a natural looking color that is close to my own is tricky.
As for what I do to handle the communication problems… from the get-go I say, “You need to know that I’m deaf and read lips. If I can’t see you, I can’t hear you.  Without my glasses I’m blind, so am also really, really deaf.  I’d love to chat, but it’s difficult unless you get my attention first.  You need to make it clear you are talking to me.  Otherwise, I’ll just assume you’re chatting with others around you.“
Sometimes this makes a hairstylist jumpy and they are very noticeably self-conscious and ill-at-ease.  However, I’ve learned these types of people are ill-at-ease with any deviation from the norm, so it’s not me, it’s them.  Others aren’t that ill-at-ease, they just figure “…why talk to her when she can’t hear?” and I’m afforded a silent hour while they fiddle with my hair.  I don’t like either.
Other times, you get someone who takes in all that your little “I’m deaf…” speech means and then disregards it all and talks like there is no tomorrow, never looking at you or even caring that you can’t hear them.  These kinds of people are only interested in hearing the sound of their own voice, and I know many people like this in life.  They just drone on without a care, oblivious to the fact that the listeners around them aren’t really listening or interested in what they are saying.  At times like these, I’m glad I’m deaf.
And then you strike gold!!  You get someone who processes what your “I’m deaf…” speech means, they reason in their own mind what that might require from them, and then they do their best to put you at ease and accommodate you, while treating you like you are human.  Even more important, they treat you like your deafness isn’t really a big deal, which it isn’t, when you find people who are willing to communicate with you in a way that you need them to.  Addy was this kind of stylist.  I miss her.

0 thoughts on “HOW DO YOU HANDLE COMMUNICATION WITH HAIRSTYLISTS AND HEARING LOSS?”