We love our conventions!

Our 2023 SayWhatClub convention will be our second international event and our first in Canada on July 10th – 13th in Vancouver, British Columbia. 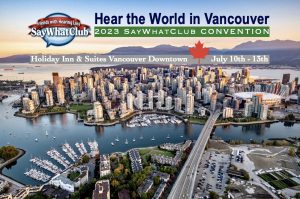 Proposals can be sent to the CSC Chair.

Thank you, Sponsors, Vendors, and Providers for your generous contributions and donations, and for helping to make SayWhatClub conventions a time of learning, inclusion and communication with friends. SWC cons are empowering and we’re glad to have you a part of our events.

Back in the mid-1990’s founding members of the SayWhatClub met online and saw the benefit of connecting with others with hearing loss.  It didn’t take long to get to know one another and to talk about meeting in person. Thus, our annual SayWhatClub conventions were born.

Those first few years were more informal—1997 in Monterey, California, and a camp-out in Colorado in 1998—but the gatherings in years following became more organized and “official”. Below is a reverse chronological list of where we have gathered over the years.

SWCers love to take pictures at the conventions! Take a look!