This year I have the hearing loop to top it off.  Now I really don’t need or want captions during the game and I can hear the commercials that aren’t captioned.  This year it looks like all the commercials were captioned anyway but I was prepared.

We got an invite this year and my husband politely turned it down after talking to me (see my reasons above).  His friend came back and said he has 3 TVs so I could have the captions on one of them.  This is where I took over and thanked him for the offer then explained my remote control control use.  “I’d need to be the remote control queen.”  I also told him I have the hearing loop here at home and that’s an added benefit.  I expected to see “I understand” but instead he came back with “You can be remote control queen and bring your loop too.”  Wow!  I get to watch the game the way I want and be social too???  Okay then, we accepted the invite.

He sent my husband a picture of the back of his TV so we could figure out the connection ahead of time.  Funny enough, we used a spare connection from the Bluetooth TV streamer I have and don’t use (I can’t keep my necklace charged to use it).    We got there a little early and this is what I see as I walk into the living room. 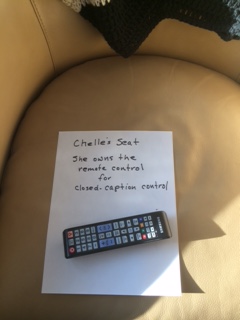 My husband pulls out the loop and it connects to the TV without a problem.

Now I’m all set with lots of options.  I can watch the game, hear the game, and socialize.  His remote control had a special CC button, so I could move in and out of super bowl captions especially fast.  I was in Super Bowl heaven.

Good food, good people and a pretty good game even though I wasn’t cheering for the team who won.  It was a unique experience and I was honored to be included. I was touched and so thankful for my husband’s friend, our friend, to include us.

I think that was the first time I’ve told someone the full reason why I don’t go to Super Bowl parties. Why haven’t I given people my reasons before?  I could be more proactive and not automatically assume it won’t happen.  There are some really good people out there.  I think most people fall into that category.  I think I’m pretty good about asking for accommodations but then something like this pops up, and I see I could do better.

2 thoughts on “Super Accommodations for the Super Bowl”