It was October 29th, 8:30 a.m. Monday morning and high tide had flooded the streets of the Rockaways before Sandy made her entrance.  The City had announced a mandatory evacuation the night before.  A full moon was expected to break more havoc for people on the east coast when Sandy made her entrance that evening. My husband and I had initially planned to stay put and ride out the storm.  Afterall, many previous hurricanes had come and gone without a problem. However, this one seemed different.  The air felt busy, the winds were picking up speed too early before the storm and the ocean was not calm as in the saying, all is calm before the storm.  No, this was definitely different.

My left ear was drowning in sounds of waves smashing against a brick wall along with the typical whooshing sounds I’ve inherited over the years.  I wish I had patented those sounds years ago, they definitely feel as if I own them.  My ear was even warning me this storm was going to be bad.  So, my husband and I packed up and left and headed for Manhattan to stay with my daughter and her husband.  Midtown Manhattan felt miles away from Sandy.  It never really felt like a Hurricane where we stayed.  The lights went out at midnight but only because the city decided to shut that part of the city down.  We had no T.V., no elevator and no lights.  The only information we gathered was from our emergency, battery operated radio.

Mandatory evacuations, warnings of storms to come, natural disasters, communication of what’s to be expected, what to stay away from, when to stay inside, when to go outside, can be life threatening and play havoc in our lives whether we are deaf, blind or even hearing.  During the storm, everyone around me was glued to the radio.  Getting repeats and rephrases were short and sweet but nothing like listening to the news yourself.  I paced alot and truly missed my internet connection to the world whether on my phone or computer.  Until this storm, I never realized how much I relied on the ability to connect with phone and internet.  I felt so out of touch with everything and everyone.  No matter how much or how little info I received about the storm, I felt I was not receiving the complete story.

After several days, we returned to our community, only to find, despair and destruction all around us.  Many homes in Breezy had burned down during the storm and approximately two blocks of homes burned down near mine.  My home was hit in the basement and first floor.  To make a long story short, I had to live elsewhere and am still living at a friends in the neighborhood.  Many of my neighbors were without homes and are slowly returning.  Many town hall meetings were gathered to disseminate information but no CART was provided.  I refused to go to any meetings where I would sit helplessly at a time when I already felt helpless with all that was going on.

However, there is a certain reality that comes with all of this.  Is it fair to ask for  CART at a time like this?  These meetings are usually held at a moments notice with people in the neighborhood being notified word of mouth.  I’m usually not the one to back off from asking for what I need but it did not strike me as the appropriate time to ask.

Afterall, many of the meetings were held to give out important information as soon as possible and with the roads being blocked, no electricity, no internet access and no public transportation, how realistic was it to ask for CART?  In my opinion, it wasn’t.  I relied on my family and friends to pass the information along to me.  Hopefully, most people have this option to ask their family or friends for the information they are not getting.  I also offered my help to the people in charge (First Responders and Doctors) if they needed anything translated to ASL.

So lets look at what we can do to be alerted and prepared.  There’s alot of good information on the internet to prepare ourselves for a disaster.  The problem is, actually taking the action to be prepared.  Most people are NOT prepared.  It is so important to have a plan  and be prepared.  I only recently started preparing a small suitcase with necessities.    The absolute necessities are :

-Knowing before hand where you plan to go if a mandatory evacuation ocurrs? Communicate with your friends and neighbors where you plan to be.  It’s totally unfair to the police and fire department if you plan to stay home and then need to be rescued.  You are not only putting your own life in jeopardy but you are jeopardizing those who have to now come in and save you and your family.  During Hurricane Sandy, due to the floods, cars floating in the streets, sections of boardwalk floating, police and firepeople could not even get to many houses to assist people in evacuating.   Several deaths due to people trying to rescue prized possessions from their basements, only to get trapped in the rising water that filled basements in less than a minute.

-Making sure you always have enough medication to take with you, if needed.

-Subscribing to websites that notify you of emergencies in your area through email and text messaging.  I am notified of emergencies through my national weather service as well as through my “NotifyNYC” accounts.  They notify me of weather emergencies in my area as well as real time notification of accidents, police activity, Amber alerts, and anything considered to affect you when you are out and about.  However, another system recently put in place is called the Wireless Emergency Alert System also known as WEA.  You will need to contact your cellphone carrier to see if your cellphone is WEA compatible http://www.ctia.org/consumer_info/safety/index.cfm/AID/12082  There is no charge for this service.

-Flashlights, extra batteries for your flashlights and extra batteries for your hearing aids and/or cochlear implant devices.  I had recently stocked up on lantern type flashlights which could light up a room.  I actually like these better than flashlights.  If you have enough hearing for an emergency radio, they are worth investing in.  They can easily be picked up at a Radio Shack or online at Amazon.com.  However, I strongly recommend all items be purchased when there are no emergencies taking place as the stores tend to run out of these items very quickly.

-2 gallon or 5 gallon gas cans.  Never in a million years did I ever think I would witness a gas shortage but a gas shortage is what we had.  I can only tell you that had I had several containers to hold gas, I could have easily obtain the gas I needed.  I spent days not being able to go to work or leave the peninsula due to conserving gas in my car for emergencies.   During the peak of the gas shortage, 5 gallon cans were selling for over $200.   Amazon.com  had  reasonable prices.

For those who don’t want to go by way of gas cans and don’t want to it in lines, if you search Craigs List as I did, you are bound to find people willing to bring you gas, right to your car.  You read correctly.  I managed to find a young man willing to travel the tristate area and bring you gas for twice the amount you would pay for it at the station.  I guess I can’t help but wonder how he got access to the gas?

The most important thing to remember is to be patient, make your needs known and be prepared. The level of stress during a natural disaster is high. Keeping a sense of humor always helps and being aware that you are not alone is very important.  Trying to be rational during a very traumatic time is difficult.  It will take you a lot further than joining the ranks of being irrational and hysterical. Surviving a natural disaster relies heavily on your mental state, your physical well being and your being prepared. Do it now, don’t put it off, BE PREPARED.  I never thought I needed to be prepared. 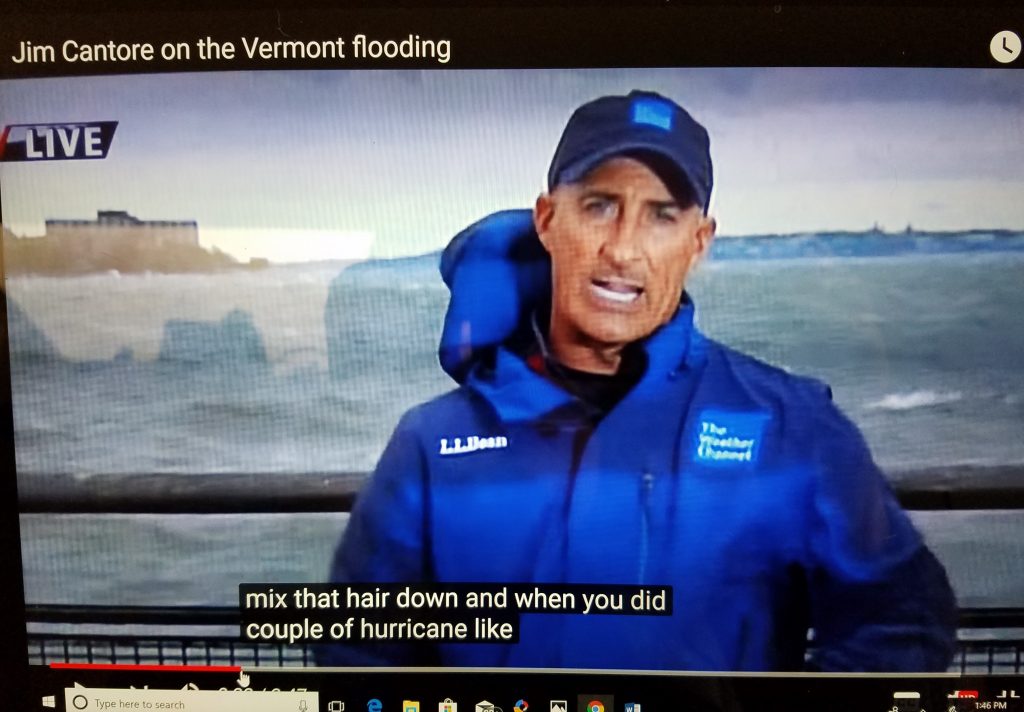 I subscribe to the “Now Norma Knits” blog.  Norma is not only “one L short of normal” (Love it! Makes me want to change my name to “Norma” just so I can say that about myself), she also knits (pretty obvious from the title of her blog), is a self-professed organic gardner and locavore (thank you, Merriam-Webster), is interested in travel, and is a CART provider by vocation.

On Monday, August 29th, Norma wrote in her blog about the flooding in Vermont and included an embedded video of Weather Channel’s, Jim Cantore, saying “Jim Cantore rather sums up the feelings here (in Vermont).”

I pressed the arrow to play, and low and behold, there was the red cc (closed caption) button. I clicked, chose “Transcribe Audio”, and sat back to listen to, or rather read, Jim’s summation of the feelings in Vermont.

Below is the closed captions for this particular video, each line representing each screen with text, as it progressed from beginning to end.

houses there and for the delivery error packages as you…

equities is are needed…

sonal caldwell and say yes it is intended for andre rieu…

the peripherals and hear professional heart…

at issue in the nazi…

obviously someone died after a long period…

new jersey for everyone…

book initial pennsylvania all across…

this is not so just saying…

healers and talk about me…

literary resented are his chances for me…

is rooted continues so back to you…

Wow, so glad this video was captioned!  I never would have known what Jim Cantore was saying had it not been!  NOT!!

(Editor’s note– the captions have been redone for the video since we posted this article in 2011.  The picture of the Youtube video was posted in 2018.)