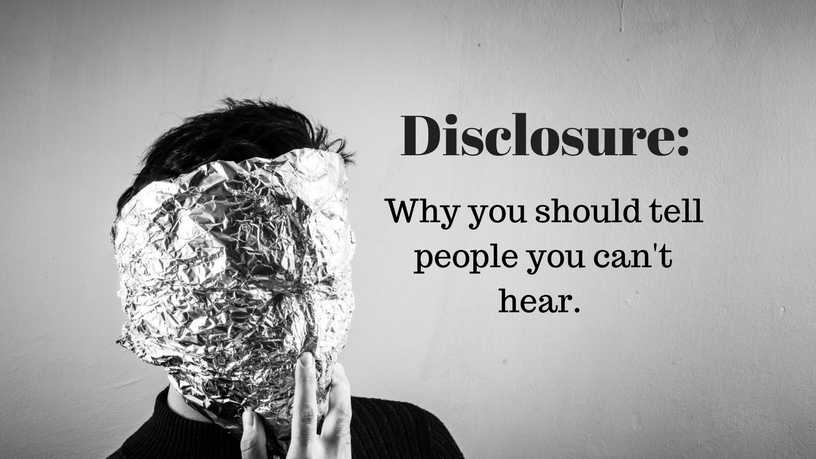 One of the more frustrating aspects of hearing loss is the constant need to explain it.  Frustrating it may be, but disclosing your hearings loss is vital to maintaining healthy relationships with the people around you.

Before I begin, I’m going to confess it took me a long time to get to the point that disclosure came naturally.  I didn’t know what to say.  I was afraid of ridicule or rejection.  Even though I did nothing to cause my hearing loss, I felt shame.  Eventually I realized that not disclosing my hearing loss caused more embarrassment than admitting it, and so I began telling people.

If you are late-deafened like me, and your speech has not been affected by hearing loss, most people aren’t aware of your hearing challenges.  Even if they can see your hearing devices, they may view them the same way they view eye glasses.  Here is a list of things deaf people do– that YOU might be doing too–  and why we need to tell others we can’t hear.

WHY YOU SHOULD TELL PEOPLE

Many of us compensate well enough to mask our hearing loss, but not quite well enough to seem “normal.”  Most people don’t understand why you behave the way you do.  Hearing loss is the last thing on their minds.  Many of these situations are examples from my own life.

Why you should tell them:  When we lip read, we stare intently at other people’s lips and eyes, or stand a little too close to get a good look at their tongues. Your body language may be misinterpreted as flirtatious, and it may be confusing people.  If the other person isn’t attracted to you, your romantic overtures could seem creepy.  On the other hand, if they respond in kind, it can be embarrassing for both of you.  By being proactive in disclosing your hearing loss and need to lip read, you can avoid those awkward times when lipreading is mistaken for sexual attraction.

We appear to ignore people.

Why you should tell them: They have no clue why you sometimes give them the cold shoulder, and it makes you seem moody.  If your hearing aid or cochlear implant has a noise cancelling program that minimizes noise behind you, while maximizing sound in front of you, it is possible that your inconsistency in hearing may lead them to believe you’re ignoring them.  They don’t understand why you answer when they talk to your back sometimes and not other times. Also, no one remembers you hear better on your left or right side.  All they know is that you sometimes ignore them.  By disclosing your hearing loss, they may not take it personally.

We don’t laugh at jokes.

Many people tend to drop their voices at the punch line.  Puns can be exceptionally confusing to people with hearing loss and to lip readers.

Why you should tell them:  You seem to have no sense of humor, or worse, you seem slow on the uptake.

We laugh at the wrong times.

Someone says their cat just died.  You hear (or lip read) their cactus died.  You laugh and say, “I KNEW that would happen.”

”Why you should tell them: You appear to be the most insensitive person they ever met!  It is much easier to explain that you misheard if they already know you have hearing loss.

We use sarcasm accidentally.

Say someone doesn’t thank you after you’ve performed a favor of some kind.  You hear them mumble something as they’re walking away, and you assume they thanked you because that would be the normal thing to say.  YOU say, “You’re welcome.”  But it turns out, they didn’t thank-you; they said something else.  Now you’ve made them feel impolite for not thanking you, so they turn around, apologize and thank you.

Why you should tell them: You’ve implied they were rude. You seem petty and sarcastic.  However, if you’ve already disclosed your hearing loss previously, you can explain you behavior as a simple misunderstanding, because you didn’t hear.

We avoid the telephone.

Luckily many people like to text, but some still love to talk on the phone.

Why you should tell them: They think you’re avoiding them when you never pick up, especially if you gave them the cold shoulder recently, or didn’t laugh at their joke.  When disclosing your hearing loss, you can let them know that you prefer texts or emails.

We answer the wrong questions.

Me: “I saw you put it there yesterday.”

Him: “What are you talking about?  I just opened it.”

Me: “And you didn’t see it hanging in there next to mine?”

Why you should tell them:  They’re wondering if you’re crazy.  It’s much easier to explain you thought he said, “coat,” not “Coke” if you’ve previously disclosed your hearing loss.

Does this ever happen to you? You ask a question and the response makes it clear that the question you asked was already asked and answered by someone else?   “Thank you, Kim, as I just explained to Michael moments ago, . . . “   Embarrassing, right?

Why you should tell them:  You seem inattentive or possibly daft.  By disclosing your hearing loss, the assumption will be that you didn’t hear, not that you weren’t paying attention.

I don’t know about you, but I would rather people know that I can’t hear than having them think I am bad-tempered, insensitive or daft.

As hard as it seems at first, disclosing your hearing loss will make your life easier, because after you tell people, they will cut you some slack if you need a repeat.  You’ll be off the hook when you avoid the phone.  No one will get upset when you don’t say hello.  They will understand you misheard if you laugh about their cat dying.  They will know to exercise a bit of tolerance where you’re concerned.

Have any of these things ever happened to you?  How did you deal with it?

To read more about the benefits of disclosing your hearing loss, go to Michele Linder’s post, Yin Meets Yang