The King Speaks, But Not to Everyone 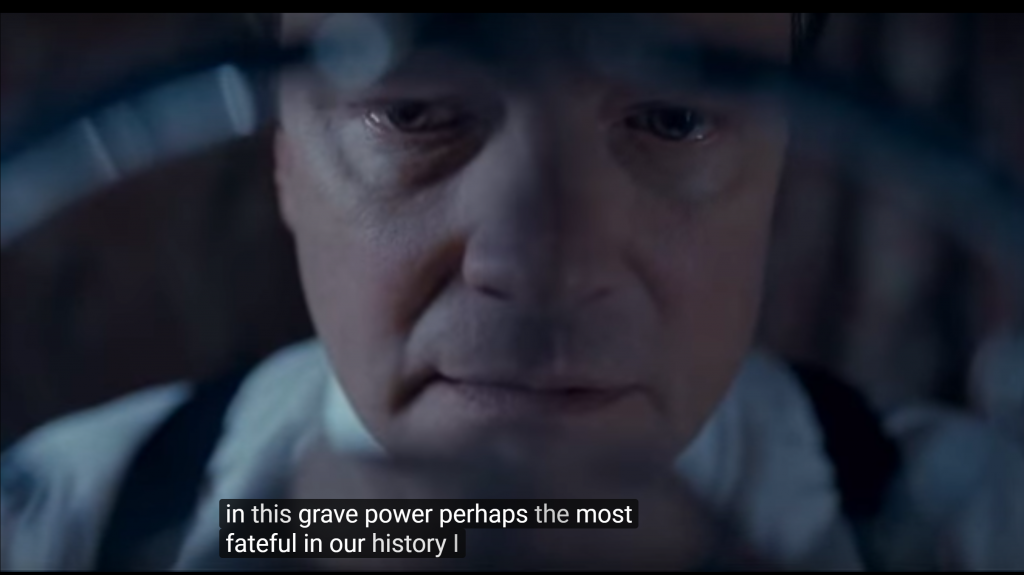 America’s movie-makers have frequently been at the forefront of social change, using the
unique power of film to help us see the world through the eyes of those whose experience is unlike our own. Those efforts to expand our collective awareness and sensitivity have frequently been recognized and honored by the Academy of Motion Picture Arts and Sciences through its annual Oscar awards. This year, for example, the Academy has honored with Best Picture nominations movies that show how the human spirit can face up to the realities of rural poverty and drug abuse, how very familiar are the problems facing non-traditional families, and how a reluctant monarch can overcome a severe communication disability.

Ironically, though, the studios that have created those very consciousness-expanding movies have inadvertently turned away millions of Americans with a significant hearing loss. They have done so by failing to provide captions for those movies.

Movie captioning is simple and inexpensive . . .

Movie captioning is a simple and inexpensive post-production process of converting the dialogue and other aural information like “door slamming” or “gunshot” into written
form, then displaying that information visually in synch with the movie, permitting those who can’t otherwise follow the dialogue to “hear” with their eyes.

The captioning is done by an organization affiliated with WGBH public television, and the captions are then distributed without charge to the movie theaters, either on a computer disc or as part of a digital package. The captions are then either superimposed on the movie screen for some showings, appearing like subtitles for a foreign movie and visible to everyone in the audience, or, more commonly, are displayed on personal viewing devices requested by those patrons who wish to see the captions without altering the movie-going experience for others. The cost of the captioning is negligible – an estimated $2,000 or less
for a feature-length film.

Historically, the availability of captioned movies has been limited by the fact that few
theaters have purchased and installed the equipment necessary to view the captions. That situation is changing rapidly because of a number of factors.

ADA laws did not require captioning in the past; ruling overturned in 2010

While the movie theaters were initially successful at arguing that the Americans with
Disabilities Act and state disability laws did not require them to provide captioning as an accommodation, that tide appears to be turning. The Ninth Circuit Court of Appeals ruled in 2010 that while the federal ADA does not required theaters to show open-captioned movies visible to the entire audience, it does require theaters to show closed-captioned movies unless the theaters can demonstrate that the cost of the captioning equipment would constitute an “undue burden.” The federal Department of Justice has strongly endorsed that result, and is in the midst of a process that could lead to a nationwide captioning requirement. The large corporate theaters owners are facing other legal threats, including a class-action lawsuit in California and another case in the State of Washington.

Digital projection has made movie captioning easier than ever

Meanwhile, the long-anticipated conversion to digital projection and away from .35 mm film
is finally taking place. Displaying captions with digital equipment is considerably less expensive than displaying captions where film is used, and there are a number of promising display devices like small personal reader units and even eyeglasses that can show captions without changing movie-going experience for others in any way.

Faced with renewed pressure from the federal government and the courts, and being able to
take advantage of new opportunities, the major theater chains are beginning to respond favorably. Regal Cinemas has declared that it will soon convert all of its theaters to digital display, and that upon doing so, it will equip all of them to show captions.  Cinemark/Century has equipped all of its Washington theaters to show captions. We believe others will follow.

More work to do at the studio level

The obstacle now is the movie studios, particularly those which do not arrange to have their movies captioned. Of this year’s Best Picture nominees, seven have been captioned; those that have not been captioned are “The Kids Are All Right,” “Winter’s Bone” and, ironically, “The King’s Speech.”

The failure to provide captions potentially excludes a very large audience. Hearing loss is most often concentrated in the higher frequencies, and interferes with the ability to understand the softer and often not vocalized consonant sounds that shape and give meaning to speech. Oftentimes, the person with the loss is unaware of it – that person’s experience is that their hearing is fine, because they hear the voice itself at a normal volume. But because of the high-frequency loss, they lose the ability to understand.

While that loss can often be overcome in a face-to-face or small-group situation, where
body language and context provide important clues, those coping mechanisms fail in a situation like movies, where key plot turns and particularly humor occur when the context suddenly changes, and something unexpected is said.

7.8 percent of the population could benefit from movie captioning

According to a 2008 study from Johns  Hopkins University, some 7.8 percent of the adult population has a hearing loss of a magnitude that interferes with the ability to understand speech. Although not just an “old person’s problem,” hearing loss is sharply age-related, with 31% of people between 60 and 69 having a handicapping loss. Unfortunately, it is the smaller-studio independent films like “The King’s Speech” that are least likely to be captioned, yet which have the greatest appeal to the demographic with the greatest prevalence of hearing loss. Captions may also be extremely useful for those whose primary language is not English.

Millions of us will watch the Oscars, and because television programming is captioned, we
will “hear” with our eyes everything that is being said. We would like to “hear” what the King had to say as well. The theaters are beginning to step up. We hope the studios will do their part as well.

* John Waldo is an attorney on Bainbridge Island,  Washington, whose practice focuses on advocacy for people with hearing loss.

0 thoughts on “The King Speaks, But Not to Everyone by John Waldo”