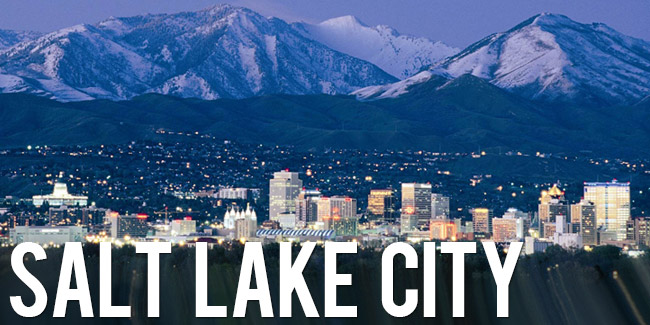 I moved to Salt Lake City three and a half years ago from the Arizona/California desert area along the Colorado River. I have to admit, Utah was the last place I thought I would ever live. The story goes something like this; I met a guy and after a year of traveling back and forth, I moved up here. First of all, I love having four seasons. I appreciate each season knowing it will change soon, there’s a definite cycle here unlike there was in the desert. (My dad said there were only 3 seasons in the desert; taxes, air-conditioning and Christmas.)

Salt Lake is the most out-doorsy town I’ve ever lived in. It’s pretty here, trees line many streets, old houses, parks that take up up whole huge blocks. When the weather is good people are out. When the weather is bad, people go up the mountain and enjoy the snow.I see people outside all the time, on bikes, jogging, hiking, skiing, walking or out in the parks with their dogs. We enjoy outdoor concerts all summer. There’s an awesome arts and craft fair downtown every year, museum walks and second hand book stores. There’s theater, ballet and the symphony so the arts culture is strong.

All my life, I lived in small town and now not only do I live in a city, I live in the capital of Utah. The benefits of living in the city has been enormous for me. I became involved with my first HLA chapter and ALDA has socials here. The Sanderson Center for the Deaf and Hard of Hearing is a one of kind center in the U.S. And offers support and many opportunities for the Deaf, deaf and hard of hearing. I feel so lucky to a part of it. I’ve seen my first captioned play here and watched my first captioned movies. So I appreciate living in Salt Lake City and what it has to offer.

Oh yes, Utah has a large population of Mormons. They make the news now and then but what religion doesn’t? Moving here, I had visions of missionaries coming to the door wanting to talk to me about their religion. It’s happened once in the three and a half years. “Not interested,” I said and that was that. Most of the people in my HLA chapter are Mormons along with our Walk4Hearing committee. Not once in all this time have they approached me about their religion and they are all very nice people. I’m pleased to know them because together we reach out into the community for those with hearing loss. That’s what we’re there for, hearing loss.

I’ve been to Temple Square and the gardens are gorgeous and the buildings old. Twice I’ve been there for Christmas to see all the lights and displays. It’s cold but it’s beautiful. I’ve gone into the Tabernacle Choir building and saw the huge organ, you can’t believe it until you see it. I’ve eaten at their restaurants on the grounds and left impressed. Still no one approached me about joining them.

When Jazzy and Donna were here to scout the area, we walked around Temple Square. We went right up to the Temple itself and questioned the lady at the gate about how people get into the temple. She was open and honest about the whole process, telling us everything and even showing us her card. No one asked us that day if we wanted to join or gave us unwanted information. For the most part, I find the Mormons I meet are super friendly people.

There are liquor laws in every state that seem a little strange. Dry counties, wet counties, no alcohol sold before noon on Sunday and yes Utah has a few strange ones too but I can go to a bar any day of the week and get served. They sell beer every day at grocery stores but wine and liquor go through state stores only which are closed on Sundays. That’s it. Nothing I can’t live with.

Don’t hesitate to come to the convention just because it’s Utah. It’s still a city with a wide variety of people in it. We have some great workshops planned for you; ALD’s, Happiness 101, hearing aid technology, CI companies coming in, traveling with hearing loss AND we have John Waldo as guest speaker for the banquet who incidentally lived here for awhile and attended Utah State. CART will be provided during our workshops and banquet.

Come tour the Sanderson Center, go to Red Butte Gardens or Park City (where some of the 2002 Olympics were held and the yearly Sundance Festival). Snowbird Ski Resort has a tram to the top of the mountain Alta Ski Resort has the Albion Basin with lots of flowers.  We can eat dinner at Hooters and then we can close down the hotel bar if we want.

Or tour a few of our breweries: Squatters, Red Rock Brewing Company, Uinta Brewing among a few others.

Coffee is available all over too, the Salt Lake Roasting Company is popular here, and there’s Mill Creek Coffee Roasters, and Park City Roasters.

If you think you might want to come, register for the convention now. You can pay later, if needed as the convention committee is workable. If later you find you can’t go, you get a 100% refund if by June 15, 2012 and June 16 – July 15th a 50% refund. (No refunds after August 1st unless specified.) And if you’re still leery, remember, you’re coming for the company which is other SayWhatClub members. We have a good time together and create our own world. I look forward to meeting many of you and getting a chance to add a face to a name.

(This convention is over.  For more information about SayWhatClub conventions, visit our convention page at SWC Convention.)