An excerpt from Gael Hannan’s book The Way I Hear It, used by permission. 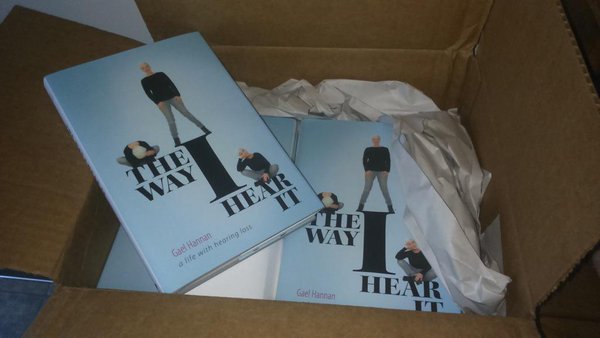 In 1995, I attended my first gathering of hard of hearing people. I was on fire with a great idea to write a book about hearing loss—yes, it’s taken me this long—and the Hamilton, Ontario branch of the Canadian Hard of Hearing Association, under the misapprehension that I was a journalist, had invited me to address their group. I went into that meeting as one person and came out another.

Looking back on that night, I blush at my naivety, thinking I was going to tell these people what was what. I had only my own experience to go on; I did not know a single other person with hearing loss. My intention that night was simply to talk about myself, but when I opened my mouth to speak, it was with a last-minute humility. Half an hour earlier when I walked into that room, it was like landing on another planet—one populated with happy hard of hearing people, who clearly knew more about what was what than I did.

People proudly wore their honking-big hearing aids. They used FM systems and pointed receivers in the faces of people talking to them. There were two screens, two projectors, an amplification system, a looped room and, for my first time ever, the wonders of real-time captioning. As I gave my speech, my eyes sidled over to the captioning screen to see the miracle of my words as they came out of my mouth, or just a few seconds behind. (Maybe more than a few; I’m a fast talker and have driven a few captioners mad through the years.)

The access in the room that night was unprecedented for me. Even more powerful was the sense of connection from the other people. It hit me like a rock. I was looking out at eighty people who were just like me. These were my people! I understood their issues and they understood mine. Hearing loss affected every area of my life and it wasn’t just my issue; it was almost a way of life that I shared with other people.

If you would like to experience hard of hearing culture like Gael Hannon, consider attending an SWC Convention.

1 thought on “What’s It Like… to experience CART/Live Event Captioning for the very first time? Part II”