This article was written by John S. Ford MD, MPH  Los Angeles, California, who is a full time assistant professor at UCLA.  This article was in Dr. Fords’ blog and written on 12/19/07

Toni Brayer MD of EverythingHealth asks the question, Why won’t insurance companies pay for hearing aids? It’s a good question and its answer has implications more far-reaching than you might think.

The obvious response would be unadulterated avarice. But if that were the case, then insurance companies wouldn’t pay for anything related to health. They’d just collect your premiums. While insurance companies may try to minimize the amounts they pay out, we all know that they must pay for something to maintain credibility (and not be sued for fraud). So something else must be happening here. And it has to do with the very  essence of what “insurance” actually is.

There’s nothing magical about how the insurance industry works. Its raison d’être has always been to spread the expenses of a rare, known risk from a small number of people to many people. This way, everyone pays a manageable amount so that no one person has to pay a huge amount.

If my house burns down, I don’t want to face the catastrophic expense of paying for a new house and its contents (and going broke in the process). So I buy homeowners insurance. I’ll probably never make a claim because my house probably won’t ever burn down. However, I sleep better knowing I’m insured for that unlikely event (also my mortgage lender makes me do it but that’s another issue).

This is insurance in its classic sense. There are other issues involved but this is the basic concept. I’ll leave it as an exercise for the reader to guess why policies exclude “acts of war” from their coverage for example.

Because having my house burn down is a rare event, fire is an insurable risk. Likewise, getting seriously ill occurs relatively infrequently rendering this an insurable event.

Why not home improvement insurance?

Compare this with getting “home improvement” insurance. Have you ever seen it? No, and the reason is that if you purchased some, the likelihood of you using it is virtually 100%. Who wouldn’t opt to replace the kitchen cabinetry if your insurance paid for it? No one. So from the point of view of the insurer, the chance of a policy holder sending in a claim for a home improvement doesn’t represent a risk so much as a certainty.

So a home improvement, in contrast with a home fire, is not an insurable risk. For the company to be able to pay off such claims, the premiums would have to equal the average cost of home improvements plus administrative costs plus the additional cost of a profit. No customer would want to pay for such a policy and no insurance company would therefore offer it.

Who has hearing loss? 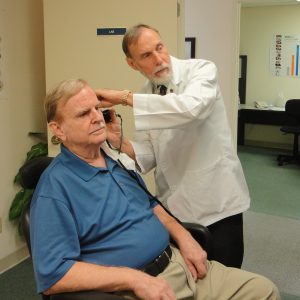 Now we come to the issue of hearing aids. Let’s divide hearing loss victims into two groups: the elderly and the young. First, let’s discuss seniors.

Approximately 30% of all Americans 65 and older and 40 to 50% of those older than 75 suffer from hearing loss (NIH statistics). These prevalence rates are so high that no insurance company can rationally consider hearing loss an insurable event. The risk is simply too high to make it financially viable.

Of course the insurance company could choose to spread the risk of paying for hearing aids to younger patients thus enlarging the risk pool. The problem with this is that the younger people are then paying substantially for coverage they have very little likelihood of ultimately requiring. It wouldn’t be so much insurance as a simple gift to the older-aged risk pool.

Should Congress step in?

Sure, Congress can step in and write laws that force insurance companies to pay for such benefits. That would be the simple solution and the morality of such laws is certainly open for discussion. But make no mistake, the end result of this approach would simply be to mandate such gift-giving from the young to the old.

Insurance companies want to be able to compete with each other for young people’s premiums. Those that refuse to force younger policy holders to foot the bill for older ones will clearly have a competitive advantage. The end result? Insurance companies won’t cover hearing aids in the elderly unless the government forces them to.

This really gets at the heart of one of the biggest problems with health insurance. Insurance was originally conceived to cover so-called catastrophic events like a major surgery or a lengthy hospitalization. These are extremely expensive, though relatively uncommon events like having your house burn down or totaling your car. Unfortunately for complex reasons, people demand insulation from all health care expenses. I’ve had patients complain to me that they spent hours on the telephone with claims people and they bombard me with “doctor’s forms” to fill out so they could get their insurer to pay for a thirty dollar quad cane. Also, patients resent even minimal co-payments for office visits.

The problem is that when health plans cover the smaller (and decidedly un-rare) events such as minor equipment like quad canes and office visits, insurance ceases to be insurance and more like pre-payment instead. So when you add to these completely expected expenses things like administrative costs and a profit mark-up, premiums become needlessly high. With this extra overhead, it would be like buying a gift coupon for yourself at a store and paying more for it than its face value. Who would do that?

This is why many people concerned about health care finance (myself included) advocate moving back towards true catastrophic health insurance and away from insular insurance.

But hearing loss is rare in younger people

Regardless, this still leaves the question of why insurance won’t cover the cost of hearing aids in young patients. To me, this is a very interesting problem. Hearing loss is much less common in young people. For this reason, one would think this risk to be quite insurable and easily distributed. It doesn’t make sense that it’s not covered unless something else is going on here.

My guess? Age discrimination laws. I believe the insurance companies would rather not cover hearing aids for anyone than have to explain to older policy holders and various regulatory bodies why they provide them for the young but exclude seniors. Trust me, no one relishes the thought of going toe-to-toe against AARP and trying to justify a bias against older patients!

Should insurance exclude the elderly and focus on the young?

How would I like to see this handled? At the risk of being politically incorrect, I’d like to see a law specifically excluding the insurance companies from age discrimination regulation and lawsuits regarding their coverage of hearing aids. The likely result of such a law would be to permit the industry to cover hearing aids for the young (insurable) and continue to exclude seniors (noninsurable).

Sounds harsh and I hope my mother doesn’t try to run me over when she reads this; but I think things will still be better than the way they are now. If anyone has other ideas about this I’d love to hear about them.