Our last Hearing Loss Association chapter meeting in Prescott last weekend was about the phone. We shared our stories about phone communication strategies. This was passed out also and I thought it valuable enough to share here as well.

Developed by Steve Barber of the HLAA-NC Wake Chapter

I have recently started using my cell phone for business, as a hairdresser. I’m just beginning and can’t afford to get a land line yet (to put in my Caption Call phone) so it’s my cell phone and uDirect (similar to an iCom). The uDirect sends my phone calls to both my hearing aids giving me bilateral hearing on the phone; every little bit helps. Most of the time phone calls come in clear and even filters out some background. Technology is nice.

It’s an amazing little device I bought last winter but resisted using until now. I can use the phone, I just don’t like to, because I developed an intense dislike of it over the last four years.  Forcing myself to use it is not easy. Since it’s a one person salon, I have no one a work to use as back up.  Every phone call I get, anxiety slips in as I brace myself for hyper attention. So far there’s only been one person I couldn’t understand correctly. I was stuck on one sentence. He repeated twice but it didn’t help so I told him to stop in anytime and he did thankfully. Small towns are great that way.

Using the uDirect takes preparation. I have to set up my phone for blue tooth then turn on the uDirect. I wear it all day while at work. If I get an unexpected phone call on my days off and can’t hook up my devices fast enough I have this message. “Hi this is Chelle. I’m hard of hearing so please speak a little bit slower for me when leaving a message and I’ll get back to you. You can also text me. Thank you, I appreciate your interest.”

So far the majority of the people want to accommodate me especially since I’m the only working hairdresser for miles. People are texting me for appointments or stopping by. One lady talked so slow while leaving a message, it made me smile. When I got her on the phone she made sure she didn’t talk too fast again. What a blessing to have such nice people in the world.

As soon as I build up to a reliable income, I’m switching to a land line for my CaptionCall phone. The back up captions will relieve my remaining anxiety and make it easier for both me and my clients. In the mean time, I will use some of Steve Barber’s strategies above and the one I need to remember most is ask for a rephrase. 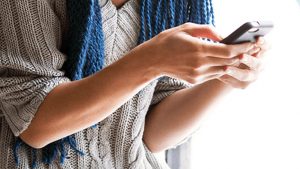 The phone is all about being social and getting information. It’s one of the first places hearing loss is recognized. Repeats are more common than in person; why? Because it’s a disembodied voice with no way to lip read or observe body language, all the little clues used without realizing it.

As I talked on the phone to my mom in the early 90’s, she stopped the conversation and said, “For God’s sake, will you get some hearing aids?” So I did and we thought that fixed the whole problem. I continued to have problems understanding some people over the phone. Some women came across too high pitched. Operators used headsets with the mouth piece too far away. Some mens voices came across as rumble without distinguishable words. The T-coil in my hearing aid helped but some words, names and numbers took more repeats than I though necessary.

Volume must be the answer. I tried pricey phones and cheap phones, looking for a good volume level. My best phone turned out to be a cheap, plastic red one that hung on the wall. It sounded louder than the more expensive ones. If I didn’t already know I had a hearing loss, cordless phones proved it. Ours came with a high/low switch but even on high, people sounded far away. The convenience of wandering around the phone was nice but all the “huh’s and what’s” got on my nerves. I went back to my cheap red phone, buying a longer cord so I could travel around the house with it.

In the mid nineties my hearing dropped again. I tried several phones but none seemed to be loud enough. My husband suggested calling the phone company because he noticed we paid a deaf tax on each bill. I called and they offered a TTY for the deaf or voice carry over (VCO) phone for the hard of hearing. After providing proof of being hard of hearing (who would want to fake that), they delivered the VCO. Excited, I listened as the representative showed me how to use it.

Talk about impersonal! I used the relay service only to call hotel operators or help lines. My friends suffered repeating because they too didn’t like the relay service much either. This phone had great volume control, a dial I could move up and down. If a family member picked up my phone without moving the dial down, they yelped and squinched their eyes while fumbling for the control. I liked that phone.

As my hearing continued to drop, I strayed further and further from the phone. I didn’t call friends to chat, I called them to set up times to get together in person to chat. At work, I let the phone ring one or two times, hoping someone else might get it instead. Understanding who they wanted to talk to on the phone could be a chore. Was it Shari, Chelle, or Terrie they wanted?

Then there came a big drop in hearing and the phone became a true struggle. This how I heard at work, as a hair stylist:

Another whole round of misfires and repeats came next as I tried to get a number to go with the name. Most phone calls when like that and there were some who I couldn’t understand at all. The girls I worked with in Arizona helped me whenever I needed it, taking over phone calls which sometimes could be my own client.

In Utah, the other girls were too busy to rescue me so I struggled through it until I began to loathe the phone. The heavy dread feeling carried over into my personal life and I stopped calling friends almost entirely. I lost a few friends who didn’t understand. As you know from my previous post, someone at work kept pressuring me to answer the phone and I quit all together.

After that, I started being very picky about who I talked to on the phone. My mom, my sister (who repeats without irritation), my boyfriend, one girlfriend who repeats all the time but doesn’t mind and maybe my kids here and there. If I don’t recognize the number, I won’t pick it up. The message on my phone tells people I’m half deaf and to please email or text me instead.

Texting is a godsend, isn’t it? Teenagers did it all the time so I stopped my daughter one day and had her teach me. Then I taught my mom who thought it was wonderful because we could keep in touch daily for the first time. Slowly, more adults learned to text and my world expanded. My tax people text, my audiologist staff will text and I even got a dentist office to text me for an appointment.

Then came web captioned services. There’s a small delay but it worked so much better than the VCO phone. We talked back and forth as normal except I had captions to go along with it. I loved it when my one girlfriend went on a rant over the phone. Her voice crackles, maybe due to all the smoking. When she’s upset or angry, she talks twice as fast as normal. I can’t keep up with her and neither can the relay operator who gets a few words in and then types, “speaker unclear” every couple of minutes. I laughed and my girlfriend laughed when I told her about being unclear. The relay operator caught more than I could at any rate.

Now there are captioned phones. I didn’t have a land line but they told me it would work through Magic Jack so I got one. People sounded so far away, not even the relay operator could barely caption it. There were big gaps of “speaker unclear.” Then my Magic Jack quit working. Magic Jack couldn’t figure it out in one phone call so I gave up. Some day soon, I’m getting a land line to try it out again. I’ll need it for work when I start again, which will be in the next month. I hear from others how much they like their caption phone and I hope it works good for me.

Phones: (Just to name a few, help me add more)

Captioned Services on the Web: (Again, help me add more.)

What do you use to communicate on the phone?